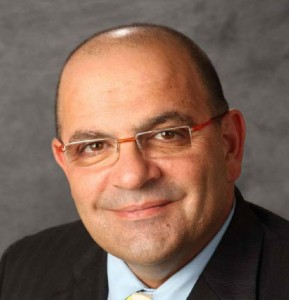 Rami Kleinmann is the President and Chief Executive Officer of the Canadian Friends of the Hebrew University of Jerusalem (CFHU), a Canadian non-profit organization that promotes awareness of and financial support for the Hebrew University and its research institutes. He was appointed to his role by the board of directors in 2007.

As CEO, Mr. Kleinmann works strategically with leaders in the public, private and nonprofit sectors to facilitate scientific and humanitarian partnerships between Canada and Israel.

He takes a hands-on approach to philanthropic leadership, bringing together diverse stakeholders in pioneering partnerships that serve a common cause. During his tenure, CFHU has spearheaded a number of high-profile collaborations, including: partnerships that foster biomedical research between top Canadian and Israeli scientists; programs that bring the University’s experts into Israel’s under-served neighborhoods to teach science; and cultural initiatives that recognize thought-leaders who embody the University’s mission to promote knowledge and understanding.

A prolific fundraiser, Mr. Kleinmann has established the “big idea” behind several best-in-class fundraising campaigns, aligning mission with interest and bringing a unified brand message across multiple platforms. He conceptualized and led CFHU’s campaign to raise $50 million for the creation of the Institute for Medical Research Israel-Canada (IMRIC) – making CFHU one of the first fundraising organizations to take up a scientific agenda.

Also under his leadership, CFHU launched several state-of-the-art online campaigns, including the Virtual Marathon for Medical Research, the first of its kind, and a similar Searching for the Next Einstein contest that encourages innovative thinkers to develop novel ideas for improving the world. Combined, the contests raised brand awareness through media partnerships worth $3 million (CND) and social networking engagement on Facebook and Twitter. An estimated 100 million people were exposed to the campaigns.

Mr. Kleinmann has a distinguished track record of advocacy and outreach. He is the former National Campaign Director for the Jewish National Fund in Canada, where his team successfully repositioned the Fund as an international environmental organization and expanded its influence beyond the Jewish community in Canada. Prior to this, he spent nearly five years in New York City promoting Israeli interests in the United States. He spent much of his time in Washington D.C. building relationships with and mobilizing support from politicians, the Christian community and religious leaders.

Mr. Kleinmann travels worldwide to build effective philanthropic partnerships. He teaches a graduate course in non-profit management and leadership at Hebrew University’s Rothberg International School and has spoken at conferences on innovation in the nonprofit sector. He is currently co-authoring a book on the art of philanthropy.

He has been published in the Jerusalem Post, Status Magazine and TheMarker. His views on fundraising have appeared in The Jerusalem Post, The Canadian Jewish News, Winnipeg Free Press, National Post and Vancouver Sun. He also has been profiled in Lifestyles Magazine and Ynetnews. CFHU programs launched during his tenure have received extensive international media coverage, including in the Wall Street Journal.